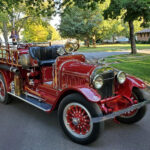 On Saturday, August 27 the Seneca Volunteer Fire Department will be hosting a 100th birthday celebration for their 1922 Model K Baby Stutz Fire Engine. The Stutz, as it is commonly called in Seneca, was purchased in March of 1922 by the City of Seneca and has been owned by the city ever since. The Stutz Motor Company produced 23 Model K fire engines between 1922 and 1928, to the knowledge of the Seneca Volunteer Fire Department Seneca’s Stutz is one of two left in existence. Restored once before in time for the 1976 bicentennial the Stutz is once again in need of repairs and restorations. A new fuel tank, tires, and radiator are needed along with updating the paint job, re-gasketing the engine, fixing the spokes on the wooden wheels, and other crucial repairs. Thus the observance of the Stutz’s 100th year will not only be a celebration but also an opportunity to raise the needed funds to perform these restorations.

Festivities on August 27 will begin with a Fire Truck Show at the Seneca City Park located at 11th and Pioneer Streets in Seneca. All fire departments are invited to bring trucks to the show and registration will begin at 9am. The Fire Truck Show will last until 4pm. In addition to the Fire Truck Show, there will be games and activities for kids and families at the park from 11am to 4pm. Activities include axe throwing, bounce houses, an inflatable jousting pit, firefighter games, kettle corn, a mini high striker, and a booth from ARC Wild. Additionally, vehicles from Nemaha County EMS, Seneca Police Department, Nemaha County Sheriff Department, Heinen Brothers Agra Service, and Kansas Department of Wildlife and Parks will be there for kids to tour. A free will donation lunch of hotdogs, hamburgers, and brats will be served in the park from 11am-1:30pm. Also at the park that day there will be a 50/50 raffle, a gun raffle, and t-shirt sales.

At 5pm there will be a fire truck and apparatus parade that begins at the city park and will travel south on 11th street to Main Street, then turn and head east on Main Street to Third Street. The parade will also feature the Cameron & District Pipe Band of Kansas City. Following the parade, the Cameron & District Pipe Band will have a performance back at the City Park. A free will donation supper will be served at the park beginning at 6pm, pulled pork, cheesy potatoes, baked beans, and cupcakes will be served. Then at 7pm King Midas and the Mufflers will play at the park until 11pm.

All are invited to help celebrate the 100th birthday of Seneca’s prized 1922 Model K Baby Stutz Fire Engine on August 27.